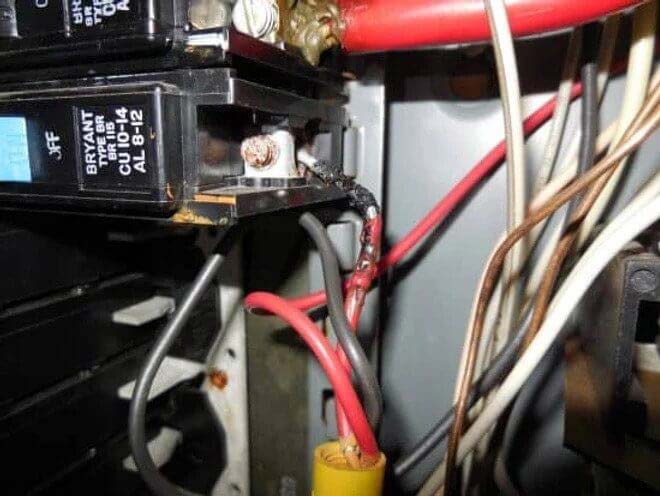 Aluminum wiring was commonly used from the mid-1960s until about1978. It was introduced because it was less expensive than copper. It was recognized from the start that aluminum wiring is not quite as good a conductor of electricity as is copper. As a result, 12-gauge aluminum was used in place of 14-gauge copper for a 15 amp household circuit.

Other wire sizes were also suitably increased. This was fine.

Some other properties of aluminum, however, were not recognized and did cause problems. Firstly, aluminum has a higher coefficient of thermal expansion than copper. This means that when the wire heats up (as all wire does when electricity flows) the aluminum tends to expand more than copper. This leads to the wire trying to move out from under the terminal screws at connections. This phenomenon is called “creep” and can lead to poor connections and subsequent overheating.

Aluminum is softer than copper, and electricians used to working with copper would often nick aluminum wiring inadvertently. Nicking the wire, of course, reduces its diameter, and its ability to carry electricity. Localized hot spots can develop where the wire has been nicked. Further, if the wire is bent after it has been nicked, it will often break.

The examination of every electrical connection in the home is not part of a home inspection. The provision of special aluminum compatible connectors is not an expensive undertaking. We recommend that the specialist check all the devices in the home of aluminum wiring and make improvements as needed. Aluminum wires that show evidence of overheating should be further investigated by a specialist. There may or may not be a significant problem. Connections on large gauge aluminum wires are typically coated with a special grease to premising vent corrosion. Where this is missing, aluminum oxide may build up and the wires may overheat.

Contact Us at Zinc Inspections if you have any questions or concerns about your property: